Kevin Love Vows To Talk About Working Harder in Offseason 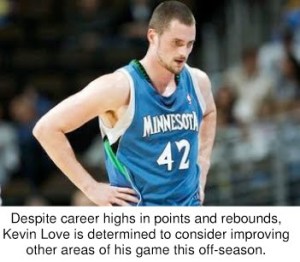 Minneapolis, MN – After suffering through his third straight losing season with the bottom-dwelling Minnesota Timberwolves, All Star power forward Kevin Love has vowed to talk more seriously about committing to work harder on his game this off-season.

Love was perhaps the lone bright spot on the down-trodden Timberwolves team during the 2010-2011 season, setting career highs in points and rebounds, turning in the league’s first 30-point, 30 rebound game in over three decades, and becoming the franchise’s first All Star since Kevin Garnett. He was also named the recipient of the NBA Most Improved Player Award.

With the individual accolades, however, came the raised expectations often thrust upon players widely recognized as the face of their respective franchises. Love often found himself a convenient target of the Twin Cities media and fans last season for his less-than-stellar physical condition, one-dimensional game, and occasional on-the-court immaturity.

Love’s recent decision to become more vocal about his possible plans to refine his game this summer came as a result of an impromptu meeting with Timberwolves’ general manager David Kahn at the end of the season.

“I guess I was a bit naive my first three years in the NBA, thinking I could skate by on my talent alone,” said Love at . “But after the low points we endured as a team last season, and after talking frankly with David about what I could do to take the next step, I decided that it was time for me to really focus my energy on not just thinking about improving my game, but also talking about it.”

Speaking to reporters on Wednesday, Kahn confirmed the meeting with Love did take place. However, he downplayed the notion that he played any role in helping Love reach the decision to become more vocal about the idea of working on his game in the off-season.

“I give Kevin all the credit in the world,” said Kahn. “He came to the realization that if he ever hoped to achieve the same level of success as the true greats of the NBA, he was going to have to start seriously considering the possibility of tossing around the idea of maybe putting in more work at some point. I think talking about that process is a huge step in his career.”

NBA commissioner David Stern echoed Kahn’s enthusiasm for Love’s decision, suggesting that it epitomizes the core values of the NBA and its proud legacy in the world of professional sports.
“If there is one thing the NBA is known for, it’s the die-hard dedication our players put into casually working towards their goals,” said Stern. “We take the utmost pride in the fact that no other professional sport can claim they have nearly as many players willing to give 60-65% of themselves 3 hours a day, 98 days a year to reach a portion of their full potential.”

Love’s decision was largely applauded by team executives across the league. Many head coaches, like Doc Rivers of the Boston Celtics, were blown away by Love’s renewed focus and dedication.

“Kevin is already one of the best players in the NBA,” said Rivers. “It’s scary as hell to think how much better he can get if he really follows through on this idea of talking about getting better. I wish I had more guys in my locker room who were willing to commit to maybe working harder.”

“Love can do whatever the hell he wants,” said Knicks forward Carmelo Anthony. “But I’ve got a full club schedule and three paternity suits waiting for me this summer. I ain’t got no time to be talking about the possibility of someday committing to work harder. That’s straight-up bullshit.”
On Thursday, Billy Hunter, head of the NBA Player’s Union, released a statement effectively distancing the union from Love and his comments.

“While we respect Kevin Love’s decision to publicly discuss his plans to consider rededicating himself this off-season, the union in no way endorses any misguided notion that all players should take similar steps,” said Hunter. “Our players are already subjected to playing 82 modestly paced games a year at nearly 50% effort for barely over $5 million a season (average player salary in 2010). We’re getting dangerously close to slave-labor as it is.”

[Update: Forty-five minutes after this report was filed, Love decided to delay his commitment to talk further about working harder in the off-season when he discovered that taking a nap was “way fuckin’ easier.”]