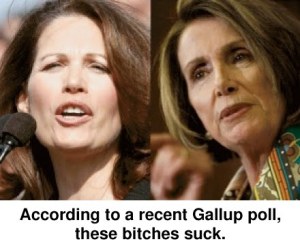 Washington, DC – Representatives Nancy Pelosi (D-California) and Michelle Bachmann (R-Minnesota) held an entirely unnecessary joint news conference on Thursday to bitch endlessly about what they perceive to be a predominance of sexist portrayals of women in politics by male journalists and politicians — portrayals that paint females as idiotic and insufferable bags of skin hell-bent on overstepping their bounds as the inferior gender.

While the two veteran politicians have a history of operating on opposite ends of the political spectrum, Bachmann and Pelosi came together under the annoying banner of female unity to shrilly spread their pointless message of equality, all without an ounce of the class or decorum expected from women who are allowed by their husbands to work outside of the home.

“I take offense to the media portraying me as a woman who needs the approval of my male colleagues in Congress in order to do my job,” said an irrational Pelosi, probably menstruating at the time. “I am a devoted wife, mother, and grandmother who simply wants to do what’s best for the people of this country.”
Pelosi was most upset with a recent Fox News poll that revealed that 98.2% of Americans believe her tax-and-spend mentality is directly related to the female proclivity for shopping. Pelosi called the poll “a farce of epic proportions,” while Fox News spokesman Gary Pressley sees Pelosi’s embarrassing rant as nothing more than grandstanding.

“I don’t know how many times we need to tell Ms. Pelosi that we’re fair and balanced,” said Pressley. “Her husband must not be paying attention to her at home, so she’s playing the ‘look at me’ card. No wonder everybody hates her. Not the people at Fox, but everybody else.”

For her part, Bachmann agreed to take part in the news conference to respond to claims that, like most women, she does not have the intelligence required to hold such an important and influential political office.

“History is filled with examples of men trying to keep intelligent, passionate women such and Nancy and myself down,” said Bachmann. “Napoleon killing Anne Frank, for example. Or how about when Nelson Mandela invented apartheid to keep women from getting their drivers licenses? Put simply, it has to stop.”

When asked for their response to the charges levied by both women at Thursday’s press conference, several prominent male journalists and politicians interviewed denied outright the annoying claims brought forth by the attention-starved women.

“CNN has always had the utmost respect for Senator Pelosi,” said CNN correspondent Clark Peters. “I can honestly say that I have not witnessed a single instance where Ms. Pelosi’s lame-ass voice, jagged face, conniving smile, or complete lack of anything resembling sex appeal has adversely affected the way this network has covered her work.”

When told of Bachmann’s poorly worded claim that male politicians on the Hill have also played a key role in the demeaning of their female peers on a daily basis, Representative William Anderson (R-Iowa) sat stunned.

“I have always treated Representative Bachmann in the same fashion as my male peers in Washington,” said Anderson. “In fact, just last week I called her over as I was telling some of the guys the joke about a stupid female senator that fucks her way into office only to find out that whores aren’t allowed on Capitol Hill. I can’t help it if she has a different sense of humor than us.”

As of Thursday evening, neither Pelosi and Bachmann had given any further comment, mostly because media members had had enough of their boring-ass shit for a day and went home.