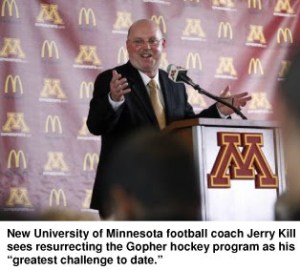 “Let me make one thing perfectly clear,” stated Kill when asked about his goals for the upcoming season. “I’m coming to the University of Minnesota with one goal and one goal only. And that is to bring the Minnesota Gopher hockey program back to the top of the heap.”

After a exhaustive nation-wide search for a replacement for recently fired football coach Tim Brewster, U of M athletic director Joel Maturi and a panel of advisors settled upon Kill, a 16-year veteran of the college football head coaching ranks. Most recently, Kill helped transform the underachieving football program at Northern Illinois University into a team that qualified for three straight bowl games, a feat that no doubt impressed Maturi and company.

“Throughout my career, I’ve always come to programs that needed a lot of work,” said Kill, referring to his football programs at Saginaw Valley State, Emporia State, Southern Illinois and NIU. “There’s no reason to believe that, with a lot of hard work, the team you see on the ice today can’t skate their way to a Frozen Four, maybe even a national championship.”

Prior to the press conference, many U of M alumni and local media members publicly questioned Kill’s ability to translate his success from mid-level Division I football programs to a BCS-qualified conference like the Big Ten. Monday’s revelation that Kill is unaware of which sport he will be coaching has only added fuel to an already raging fire of criticism.

“Once again, Joel Maturi failed to do his due diligence with a coaching hire,” said U of M booster Vance Walsh. “Sure, Tim Brewster was borderline retarded, but at least he knew which stadium his team played in. This guy [Kill] just spent 40 minutes talking about how the ice sheet at Mariucci Arena was built for forechecking and neutral zone traps. What the f*** is that?”

At one point, when asked by an Associated Press reporter if he had any idea which sport he was hired to coach, Kill responded by saying, “That’s the thing about sports writers. They like to think they know more about sports than the coaches themselves. Well, when my team takes to the ice, we’ll see who knows their stuff.”

While early alumni and media reaction to Kill’s comments has been understandably critical, several U of M football players interviewed following a Monday morning meeting with Kill seemed enthusiastic about their new coach’s philosophy.

“All that’s important to me is that I get a fair shot to play,” said sophomore quarterback Marqueis Gray. “I’ve never skated before, but I bet I could be that guy with the big gloves and couch cushions on his legs who stands in front of the net thing.”

“It’s impossible to talk to coach Kill and not want to hit the ice right away,” said Olson. “His enthusiasm is totally contagious. When he told us the WCHA (Western Collegiate Hockey Association) was ours for the taking, I had shivers running up and down my spine.”

Meanwhile, when informed by Maturi after the press conference that he was, in fact, hired to lead the U’s football program, witnesses report Kill was seen shaking his head and muttering “F*** me.”