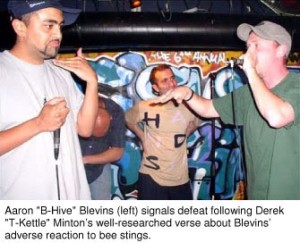 The battle between street rappers Derek “T-Kettle” Minton and Aaron “B-Hive” Blevins took place in the parking lot of the Wendy’s restaurant at the intersection of Dale St. and University Ave. in St. Paul. Both rapper’s feelings were heavily bruised following what one witness described as “a ruthless series of well-researched, fact-based disses.”

Blevins, who conceded defeat in the fourth round, was reported to have received significant emotional scarring which will most likely require some positive reinforcement from friends and family, as well as a full-night’s sleep. The full extent of Minton’s hurt feelings were not immediately available.

END_OF_DOCUMENT_TOKEN_TO_BE_REPLACED

After evenly dividing the past decade between imagination-deprived songwriting and an apathy towards anything resembling his former success, it looks as though Weezer frontman Rivers Cuomo has finally taken the plunge fans and critics have been expecting for years and become a complete and utter sell-out.

In a move that must have delighted Weezer’s fourteen remaining fans, Cuomo, whose last few albums with the former alt. rock darlings have proven as underwhelming as a ValuPak coupon mailing, joined forces with hip hop talent-vortex B.o.B., lending his voice to the aspiring pop star’s latest waste-of-five-minutes “Magic.”