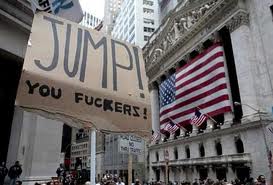 “I stand before you today with a heavy heart,” said a visibly weary Obama. “If you would’ve told me three years ago that the suicide rate of U.S. bankers in 2012 would be under 2%, I would’ve called you a fool. Yet here we are, three years later, with fewer dead bankers, brokers and traders than at any time in this nation’s history.”

Extensive research in 2008 led many experts to predict record-high suicide rates shortly after Wall Street’s epic collapse. Obama’s ascension to the White House, along with his promise to clean up the U.S. financial sector, only reinforced those optimistic predictions.

“Fiscal year 2009 was going to be an astonishing year for suicides on Wall Street,” said Financial Times executive editor Vance Madden. “We were calling it ‘The Year of the Open Wrist.’ But aside from that guy who stuck a letter opener in his ear and the woman who started herself on fire and jumped out of the Goldman Sachs building, there was very little to get excited about.”

While many of the projected Wall Street suicides were actually projected to take place during President Bush’s last months in office, many political experts have pointed to the bank bailouts and continued lack of regulation that have marked Obama’s first term as key factors in helping those on Wall Street dismiss feelings of guilt. In response to these assertions, liberal media outlets have deflected blame away from Obama, instead turning the focus to the unwillingness of Republicans in Congress to support the president’s economic reforms.

“President Obama can criticize George W. Bush and the GOP all he likes, but it was his administration that gave bankers a reason to live,” said Republican strategist, Gil McNamara. “If it weren’t for his naive attempts to rebuild the financial sector, Wall Street would literally be covered in corpses. I have serious doubts as to whether you’d have been able to ride a bike down the street, there’d be so many rat-covered bodies.”

“The Obama administration has failed this country time and time again when it comes to Wall Street’s perilously low suicide rate,” said Romney at a Cincinnati-area coffee shop. “If I’m elected this November, I solemnly pledge to increase the number of self-inflicted deaths in the banking community by over 20% in my first year in office. Bankers who won’t kill themselves will be murdered and have suicide notes planted in their pockets. We’ll be sneaky about it, but make not mistake, it will get done.”

Despite being shocked by the startlingly low suicide statistics, President Obama has also pledged to right the ship during his next term.

“During this nation’s Great Depression, many of those responsible for the economic collapse made amends to their fellow countrymen by jumping from high-rise windows, shooting themselves in the temple with back-alley revolvers or chasing a handful of pills with a tankard of whiskey,” said Obama. “There is no reason that this proud nation cannot return to those glorious days. Suicide is an easy escape, and I will work night and day to convince Wall Street of that.”

In related news, JP Morgan Chase, Barclays and Citigroup have all announced multi-billion dollar investments in sleeping pill and razor blade manufacturers. The source of their funding is not yet known.