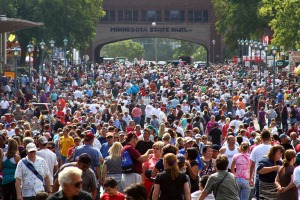 Backstory: Deathly allergic to using pants pockets since the age of three, Bill Garrison spent years attempting to find a safe, yet stylish, way to transport his everyday valuables. While on vacation in Europe in 1996, Garrison noticed a group of practical American tourists wearing snazzy-looking waist purses that allowed them to freely use their arms while still keeping their valuables close. He purchased his own pack moments later. Like Garrison’s chances of ever getting laid, the rest is history.

Super Power: Fanny Pack doesn’t actually have any super powers, but he does have a shit-load of stuff in his leather belly bag, including bug spray, handy wipes, an Olive Garden gift card, an empty Altoids tin, $6.84 in assorted change and a toothpick that’s still in good enough shape to use again if he needs it.

Backstory: Having foolishly accepted the advice of a heroin addict living in her father’s tool-shed who told her that brushing with Mountain Dew was “way better than using toothpaste,” Monica Vendella lost eighteen teeth before the age of 25. Unwilling to invest in dental implants or dentures, the gingivitis-stricken seductress embraced the three-inch gap between her two closest upper teeth and was reborn as Gummy Few Teeth. Evil-doers beware!

Super Power: Able to effortlessly flash a captivating smile with only 30% of her teeth, Gummy Few Teeth can also eat an entire bag of mini donuts without needing to floss afterwards.

Mortal Enemy: Corn on the cob

Backstory: Born in Scotland, Patrick McGonaghy moved to Minnesota in 1994 in an attempt to escape the taunts of townsfolk who told him he looked downright repulsive in a traditional Gaelic kilt. Soon after arriving in the Upper Midwest, McGonaghy began drinking copious amounts of domestic beer and making his own kilts from unwashed tablecloths. The result of his efforts was a wardrobe made up completely of ill-fitting kilts with food stains on them.

Super Power: The Kilt is able to become obscenely drunk in public, remove his shirt to reveal his big, hairy gut and obliviously dance amidst a crowd of strangers in only his kilt—all without an ounce of shame or modesty.

Backstory: Donna Milton grew up in a small farming community outside of St. Cloud, MN. While shopping in the town thrift store one morning, she spotted a bright white pair of shorts that were four sizes too small, which she immediately purchased. Determined to lose enough weight to fit into the shorts by the time the State Fair rolled around, Milton embarked upon what her doctor called “a strict diet.” Not understanding what “strict” or “diet” meant, she actually gained 32 pounds, but decided to wear the shorts in public anyway.

Super Power: In the time it takes a hummingbird to flap its wings once, the Brown Stripe can take an otherwise clean pair of white shorts and mysteriously apply a faded brownish stripe to the butt-crack region of said shorts.

Mortal Enemy: A fart that is actually poop