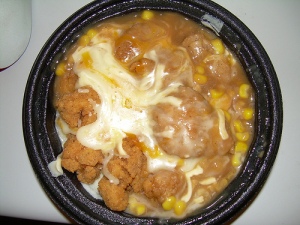 Louisville, KY – In an announcement that has digestive tracts across the country rumbling, Kentucky Fried Chicken (KFC) has announced the September release of a brand new multi-food bowl offering guaranteed to induce immediate, possibly violent, diarrhea.

“KFC’s long-standing tradition of providing families with inexpensive meal options, none of which can be proven with 100% certainty to cause diabetes, is alive and well,” said company CEO Dean Kepler. “With the release of this tasty new offering, no longer will hungry Americans need to spend hours attempting to create a mildly edible meal out of tainted, discarded and otherwise-leftover food items. Now, KFC will do it for you!”

Responding to lagging sales of their original Famous Bowl—a bowl containing mashed potatoes, chicken, corn and gravy—KFC strategists first began kicking around new ideas for multi-item bowl offerings in February of this year. Six months of top-secret meetings and over $142 million in research and development later, the Yummtastic Bowl was born.

“Even though we were determined to evolve the food-in-a-bowl concept to new heights, we also wanted to retain the pioneering spirit behind the original version,” said Kepler. “To do this, we had to focus on ideas that would make use of an entirely new batch of refuse and expired inventory, while also finding a combination that would taste slightly above average and reduce our garbage collection costs.”

Initial KFC proposals included a plastic cup filled with spoiled coleslaw, used napkins and dirty dishwater and a family-size version of the original Famous Bowl served in a five-gallon bucket with a loaf of moldy Wonder bread served on the side. In the end, however, it was determined that the Yummtastic Bowl’s low per-unit cost would best allow the company to settle any wrongful-death lawsuits stemming from its eventual release.

Early consumer testing results, while not up to many reputable restaurant chains’ standards, convinced KFC executives to move up the Yummtastic Bowl’s release from Mother’s Day 2013 to Labor Day of this year.

“To say consumer testing of the new bowl has been successful would be a massive understatement,” said Vanessa Bridgeman, VP of Marketing for KFC. “Of the 200 focus groups conducted this year, only 94 resulted in predominantly negative feedback. Additionally, well under 75% of all participants reported uncontrollable vomiting and/or high levels of blood in their feces. Armed with those numbers, we felt America was ready to chow down.”

While results from KFC’s independently conducted consumer testing have yet to be verified, informal feedback from a number of dangerously obese focus group participants in Alabama and Texas has been largely positive.

“I was a little wary at first, but it only took one bite for me to realize that this thing was the real deal,” said KFC regular Phil Denmore. “Sure, it smelled like a Ziploc bag full of used band-aids, and had the consistency of cottage cheese covered in pudding skin, but after you eat about three or four of ’em, your body gets pretty acclimated. Classic KFC.”

While final pricing has yet to be set, the Yummtastic Bowl is expected to be priced at around $4.99. As part of the company’s new green initiative, a number of KFC locations will reportedly be offering $2 off for customers willing to have their order served in a previously used bowl.