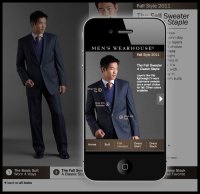 DEAR MEN’S WAREHOUSE iPHONE APP: I’ve been dating my boyfriend Alex for ten years, and he still changes the subject every time I bring up marriage. Am I wasting my time staying with him? — STILL SINGLE

DEAR STILL SINGLE: Every relationship has it’s own unique timeline. While some may progress at a heart-pounding pace, others may inch along like a T-Mobile MyTouch attempting to download another men’s clothing retailer’s smartphone app.

The question you need to ask yourself is: Is my boyfriend worth the wait?

For his part, Alex is simply following the male gender’s deeply ingrained instinct to get what they want and hold on to it, all while avoiding a more permanent commitment. Unlike the purchase of a Ralph Lauren three-piece, charcoal suit during the Men’s Warehouses “Spring Savings” sale, he is most likely aware that marriage is not something you can return for a full refund. That’s enough to make even the bravest of male souls overly cautious.

So, what’s the solution? While some women would throw their spineless man’s belongings on the front lawn and change the locks, I’d like to suggest you another approach.

Men’s Warehouse is currently running a Buy One, Get One suit special. By purchasing your man two luxurious new suits at MW’s amazing prices, you are reaffirming your commitment to the man you love, while also subliminally planting images of him dressed formally (perhaps at your future wedding?) in his head. Odds are, he’ll be down on bended knee in his triple-stitched, natural-fiber dress pants asking you to spend the rest of your life with him.

DEAR MEN’S WAREHOUSE iPHONE APP: This may be hard to believe coming from a wife of thirty years, but me and my husband’s sex life is as hot — and frequent — as ever. It’s almost as if we’ve been on one long honeymoon. Recently, however, my husband has begun refusing to make love with the lights on. Should I be insulted? — IN THE DARK

DEAR IN THE DARK: Don’t you dare start to question your sex appeal! If hubby is still coming to the store as much as you say, it’s a safe bet he’s still a big fan of the merchandise. It’s only human nature for you to think that the lights-out nookie is about you and something you may be doing wrong, but it most likely comes from a place of poor self-image on your husband’s part.

With that said, this isn’t like a one-time-only coupon you download from the Men’s Warehouse mobile website. You can’t keep it to yourself. While your husband may be the one with image issues, it is obviously having a detrimental impact on your sense of self-worth, as well. If left unchecked, these feelings of inadaquecy and self-doubt will lead to an end of that “hot” sex life you mentioned, and maybe worse.

While there is no perfect way to broach subjects of intimacy to men, there is hope. Have you considered surprising your husband with a Pronto Uomo Light Blue Slim Fit Dress Shirt from Men’s Warehouse? At $69.99, this 100% cotton stunner is one shirt he won’t want to hide in the dark while you go down on him in the kitchen. Or how about surprising him with a Calvin Klein Blue Check Skinny Tie? He’ll be begging you to turn on a few extra lights as he ties it around your neck and takes you from behind like a junkyard dog. Throw in a pair of Men’s Warehouse all-cotton argyle dress socks, and he’ll want the room to be well-lit when he stuffs them in your mouth to keep you from moaning too loudly.

These amazing purchases will make your husband such a fan of the light that your electric bill — much like his genitals inside of you — just might burst!

DEAR MEN’S WAREHOUSE iPHONE APP: When I married my husband, I knew he had a temper. In recent months, though, his fuse has become extremely short. It’s as if everything I do causes him to break into a yelling fit. I still love him, but things have gotten so bad that I’ve found myself contemplating leaving him. Am I wrong to think that divorce is the only way out? — GOING DEAF

DEAR GOING DEAF: No marriage is without those moments of disagreement or anger between spouses. When those moments take the form of verbal abuse, however, we need to take a close look at the impact they have on our physical and emotional health.

A recent study by Men’s Warehouse University showed that 32% of couples have at least one spouse with elevated levels of what you are calling “temper.” Before you decide to move forward with the dreaded ‘D’ word, however, might I suggest you give the ‘V’ word a try, as in our 100% cashmere v-neck sweaters?

As soft as a kitten’s belly, these durable and attractive sweaters are so comfortable that your husband may very well forget all the things about you that rightfully drive him crazy. Your constant nagging about the unfinished household chores? Muted out by the double-reinforced collar. The dent you put in the driver’s side door of his ’67 Mustang? Invisible to him as he enjoys the ribbed hem and cuffs. Hell, at $79.99, he may even forget that you maxed out the American Express card on supplies for that quilting business you scrapped before you even started.

With that said, if the v-neck doesn’t quell your husband’s unruly temper, please feel free to use the taser function on the Men’s Warehouse iPhone app to shock the bastard in the armpit while he sleeps. It can be found in the accessories menu under “domestic abuse deterrents” and is guaranteed to put the fucker down. George Zimmer guarantees it.