Letter From God To Tim Tebow Regarding Jeremy Lin 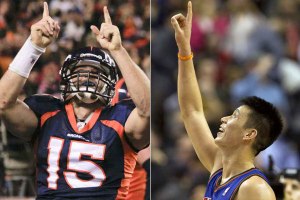 Long time no talk. Sorry for not responding to your prayers in a while. It’s been really crazy around here lately. Between this gay marriage debate and getting prepped for Easter, I’ve hardly had any time to myself. I haven’t even had time to pay my bookie for that bet I lost on your last playoff game. (Thanks for that, by the way. JK.)

Seriously, though, I did want to get in touch to let you know about a big change in my life that will undoubtedly affect you. And while it may be difficult for you to understand and accept at first, I think we’ll both be better off in the long run. Regardless, you deserve to hear it from me, not TMZ or ESPN.

As you may have heard, I met someone else a couple of weeks ago. His name is Jeremy, and he lives and works in New York. Without gushing about him too much, he graduated from Harvard with a degree in economics and, like you, is a very popular athlete (what is it about me and athletes?). Like me, he didn’t have a lot of followers early in his career but has since really gained a ton of faithful fans. I sometimes wonder if I should sue him for stealing my story. LOL!

I know what you’re thinking (literally, I do). Yes, I did say that I would never become involved with anyone from New York City again after Spike Lee’s movies started tanking. And, yes, I spent the better part of 2011 telling you that I hoped the Broncos ended up playing the Jets in the AFC Championship so I could plant more stories about Rex Ryan’s foot fetish. That said, when destiny calls, you have to answer. And in his press conference the other night, Jeremy called me by name.

Now, I’d be lying if I said that Jeremy’s public devotion to me is as strong as yours. We both know that’s impossible. And don’t get me wrong. I love all the attention you have brought to my teachings. You throwing for 316 yards in that playoff game when my most famous bible verse is John 3:16? Fucking awesome. That said, I really just felt I needed to find someone who was into me, but not that into me.

So, what does this mean? Well, you know I would never try to tell you how to live your life. I would, however, like to ask a big favor. If at all possible, could you dial back on the kneeling and pointing at me? I know it’s your thing, and I really do appreciate it, but Jeremy is a bit touchy about these sorts of things. He seems to think that his acknowledgment deserves the bulk of my attention now. And let’s be honest. That probably can’t happen with you doing your thing every time you throw a touchdown—rare as that may be. 😉

Anyway, I know it sounds cliché, but I hope we can remain friends. As every year passes, I feel as though I have fewer and fewer true friends down there. Hell, if this Scientology thing continues to catch on, I may be out of sports altogether. If you ever need anything, I hope you’ll just continue to ask. If you’re uncomfortable coming directly to me because of Jeremy, please feel free to go through the back channels with our Jewish friends. They may not have as much respect for my only begotten son as I’d like, but they have always been pretty reliable peeps.

Good luck on the upcoming season. Keep the elbow up and follow through all the way to the target (I know, I know. I said I’d stop with the armchair coaching).