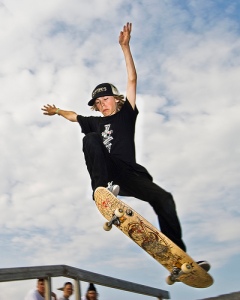 San Bernardino, CA — Local skateboarder Connor “Breakout” Mendelsen shocked a group of onlookers at the East Side Skatepark on Tuesday after successfully completing a trick that looked strikingly similar to three dozen other tricks he performed earlier in the day, but was reportedly way tougher.

Mendelsen, 12, who has been skating at the East Side Skatepark for over six years, had just completed back-to-back pressure flips when he attempted a trick known as a 360 Pop Shuv It. After extending the trick an extra two degrees—a trick Mendelsen termed a “362 Pop Shuv It”—onlooking skaters screamed their approval out loud for nearly 45 seconds, before returning to their purposeless loitering and intense cursing of nearby residents playing tennis.

“I ain’t be believin’ that Breakout pulled that 362 Pop Shuv It when I first seen it,” said longtime San Bernardino skater Danny “DeLux” Grant, 15. “Ain’t nobody never done that trick to exactly 362 degrees. I was like ‘Whoa, motherfucker!’ Truth.”

According to skateboard historian, Lenny Weeks, Mendelsen’s 362 Pop Shuv It was the first known successful execution of that exact trick, a distinction that could very well result in several people remembering the event for more than a day.

“I’ve personally witnessed skaters going 359, 361, and 364 degrees with the Pop Shuv It,” said Weeks. “But I’ve never heard of anyone busting out the trick at exactly 362 degrees. If everything we’ve heard is true, this kid really just made skating history.”

Critics of Mendelsen’s claims have argued that Tony Hawk’s 361.4 Pop Shuv It at the 2007 X Games actually represents the first successful 362 Pop Shuv It, as international skateboarding code stipulates that all degree-related tricks be rounded up to the nearest degree. Mendelsen disagrees.

“I pay all respect to Tony Hawk,” said Mendelsen on Tuesday. “But anybody who says his X Games trick was the same as mine is fucked-up crazy. Everybody knows that 362 degrees is way more than 361.4. It’s like 2.3 degrees difference or something.”

Later in the day, Mendelsen also reportedly completed a spinning, flip thingy that hadn’t been seen since eight other boys completed the trick an hour earlier.