This past weekend, while flipping through the seemingly endless array of highly addictive visual garbage on my television, I stumbled upon a true classic from the sports movie genre. A film for the ages, if you will. Yes, I’m speaking of Major League.

Much like its motion picture peers — Citizen Kane, The Godfather, and The Adventures of Pluto Nash — Major League pulls at every emotion simultaneously, all while introducing the world to a cast of characters unlike any seen before, or since, on the silver screen.

The timeless story of a rag-tag group of quasi-professional baseball players who beat the odds (and the Yankees), Major League was followed by two very underwhelming sequels, both of which could very well have damaged the franchise beyond repair. Unless, that is, a visionary director with talents on par with Martin Scorsese or Orson Welles is willing to risk it all to ensure that the following sequel is made into Hollywood gold.

Its 2011. The Cleveland Indians are still languishing at the bottom of their division. Fan support for the team is at an all-time low. Ownership is, yet again, considering moving the team out of Cleveland. Can anything save this once-proud franchise?

No need to worry. The boys of summer are back. And they’re better than ever. Kinda. Actually, they’re mostly just older. And they have really hairy ears. And they smell like moth balls and Sanka. Anyway…

You guessed it. Jake Taylor is back behind the plate. After having experimental surgery to have his perpetually ailing knees replaced with those of a gorilla, Taylor can now withstand nine innings behind the plate without problem. Unfortunately, the surgery has left him with the strong desire to throw his feces at people, often at opposing players. Also, since his famous bunt in ’89, Taylor has become a bit too reliant on trying to trick teams by calling his shot and then bunting. Teams now field Taylor’s bunts cleanly once or twice a game, leading Taylor to a career-low .094 batting average. Stats and feces-throwing proclivity aside, Taylor is the consummate professional and provides the veteran leadership the team needs.

Ricky “Wild Thing” Vaughn, fresh off a 2-14 season for the Yoshibi Dragons of the Japanese Baseball League, signs a one-year contract to anchor a very young and inexperienced Indians starting rotation. The good news? His hepatitis B has not given him problems for over three years, and he has almost completely kicked his 2k-a-week cocaine habit. The bad news? With a fastball clocking in at 84 mph, opposing hitters are hitting .478 against the right-hander. The in-between news? It’s nothing that thick-framed glasses and a crazy haircut can’t fix. Or so the Indians hope.

Not invited to spring training, a morbidly obese Willie “Mays” Hayes shows up to camp anyway. Waking up in the parking lot one morning to the sound of a starter’s pistol, he sees the camp invitees running timed sprints in front of the coaching staff. Hoping to repeat his miraculous “pajama sprint” from his first spring training in ’89, Hayes joins two players in an already-in-progress 40-yard dash. Unfortunately, since ballooning up to 284 lbs (he uses fried chicken skin in the place of chewing tobacco), Hayes no longer runs so well. He is forced to stop the sprint after ten feet to catch his breath. Team officials have him removed him from the field and charged with trespassing. A violation of his probation stemming from an insurance fraud conviction, Hayes is sentenced to three years in a state penitentiary.

Deciding to try a second stint as the

Indians manager, Lou Brown agrees to lead the rag-tag bunch through another roller-coaster ride of a season. Unfortunately, Brown suffers from severe dementia. While he has no problem filling out his lineup card and managing his pitching staff, Brown’s constant dugout nudity and penchant for randomly screaming Megadeath lyrics at his players has ownership looking for an in-season replacement.

Roger Dorn has been with the Indians for the past 25 years, both on the field and in the front office. In dire need of a third baseman with singles power and limited range, ownership asks Dorn to once again put on his cleats and jog out to the infield for 162 games. Still unwilling to field a ground ball that might potentially damage his future endorsement deals, Dorn gets into another heated argument with manager Lou Brown. When an angry and disoriented Brown once again pisses all over Dorn’s contract, Dorn stabs him in the throat with his car keys. He later agrees to field his position to the best of his ability, much to the chagrin of a hospitalized Brown, who has no idea what year it is. 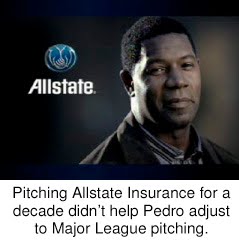 Pedro Cerrano is back at DH for the power-deprived Indians. Having spent most of the last decade pimping Allstate Insurance, Cerrano is ready to make launching baseballs over the outfield fence a full-time job. One problem. Cerrano’s intense focus on learning to hit breaking balls has left him unable to hit even the slowest of fastballs. Overjoyed by this discovery, pitchers of every talent-level throw Cerrano non-stop fastballs, leading to a league-leading 297 strikeouts through 92 games. He is cut from the team halfway through the season and is never heard from again.

Eddie Harris is dead. While management had hoped the 72-years-old, junk-ball pitcher would be able to pitch one more season, Harris had long since passed away from a congenital heart defect. After hearing the news, Indians officials plan to honor Harris prior to their first regular season home game. Two days before the opener, however, the team learns that the actor who played Gunther on “Friends” will be in town for the opener, so they decide to honor him instead.

As for the story, when new owner Bill McElroy (played by Al Pacino) tells the team that he intends to move the team to Boise, Idaho, regardless of how they finish the season, the team decides to go out in a blaze of glory. Yes, just like they’ve done so many times before.

In dramatic fashion, the Indians pull out all of the stops to beat the hated Kansas City Royals 3-2 on the final day of the regular season. The victory propels the Indians to a 38-124 record, the worst ever in baseball history. Moments later, MLB executives finalize the paperwork to contract the team, and one of baseball’s oldest franchises disappears forever.

Shortly after the game, Ricky Vaughn overdoses on Bud Select and a Nikki Six-sized shot of heroin and dies in the locker room showers. Or did he? I smell a Major League 5!