As the lead singer of Nazareth sang so many years ago, “Love hurts.” For Ray Pruit, those words would become something of a calling card.

A working class musician with a slight temper problem, Ray dated Beverly Hills temptress Donna Martin from 1994-1996. A fish out of water amongst the affluent 90210 residents, Ray always felt like an outsider attempting to pry his way into the life of the woman he loved. This insecurity often led Ray to fits of jealousy and rage. Fits that would lead to the most regrettable action of his life.

In the summer of 1995, Ray let his often-erratic temper get the best of him during an argument with Donna. In Palm Springs for an the Alpha/KEG convention, the couple became embroiled in an argument at the hotel regarding the lack of attention being paid to Ray by Donna. The confrontation moved outside the hotel, finally reaching its boiling point just below the staircase leading up to their room.

While attempting to evade Ray’s jealous ravings, Donna made her way up the stairs, only to be followed by her furious boyfriend. After a brief exchange midway up the stairs, Donna would find herself flying down the staircase, finishing the fall with a poorly executed landing on the concrete landing below (see video below).

While I in no way condone any form of physical or emotional abuse against women, I have always found it difficult to completely fault Ray for his actions on the hotel stairway that fateful day. While men who harm women deserve little, if any, latitude for their abusive actions, it can be argued that Ray’s hand was forced by a number of circumstances not under his control. Reasons brought on by a well-meaning, but misguided girl named Donna.

Here are five reasons why this writer believes Ray should be given a free pass for his girlfriend-tossing transgressions:

1. Denim Overload
For someone pursuing a career in the fashion industry, Donna Martin showed extremely poor judgment and fashion sense on the day of the incident. Dressed in jeans and a denim button-up shirt, she broke the cardinal rule of covering over 75% of her body in denim material.

With his own music career languishing, Ray most likely was hoping to piggy-back on Donna’s success as a soon-to-be fashion industry phenom. However, witnessing his girlfriend walking around with such a blatant disregard for denim etiquette could very well have dashed any dreams Ray had of successfully leaching off of Donna. It’s enough to make the kindest heart grow angry.

While never fully explored, another denim-related theory suggests that Ray throwing Donna down the stairs was nothing more than an attempt to dirty her outfit, causing her to change into a non-denim ensemble. Opponents of this theory argue that Donna most likely had several changes of denim back in the room, meaning Ray would need to shove her down several more staircases to effectively render all denim unwearable.

2. You Don’t Waste Perfect Stairs
Throughout his relationship with Donna, Ray was surrounded by staircases unsuitable for pushing a woman down.

The staircase at Donna’s beach house, while steep and unpadded, offered little room for both Ray and Donna to move. The Walsh’s staircase, while containing a wealth of stairs and a wonderful right turn at the bottom, was always under the watchful eye of Mrs. Walsh. And the rest of the stairs in the 90210 zip code were off limits to someone as poor as Ray. 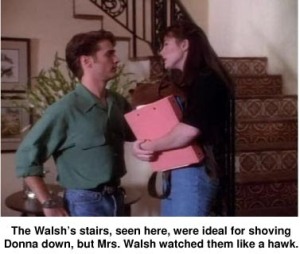 Meanwhile, the staircase at the hotel had everything Ray needed to pull off a perfect Donna chuck. The staircase was wide enough for Donna and Ray to really use the space around them during their argument. The freedom of movement that both experienced was something not present during any previous stairway confrontations between the two. Most importantly, the staircase was also well protected from onlookers by solid stone sides. If not for the Peeping Tom ways of Valerie, Ray’s world-class throw of Donna would have gone unnoticed by outsiders.

One simple reality is clear. If Ray ever wanted to throw Donna down some stairs, this was going to be his best opportunity. And as evidenced by Ray’s throw, the stairway was, in fact, ideal for the occasion.

While he doesn’t get much air on his throw, Ray does succeed in forcing Donna to do several spiral twists on her way down. The tight rotation of each twist provides an almost acrobatic feel to the throw. Plus, it keeps Donna’s huge construction work books from breaking or steadying her fall.

A perfect throw from a wily veteran.

(THEORY PLAUSIBILITY: 9 out of 10 stairs)

3. After Dark….Again?
While it always seemed as if she was working tirelessly to further Ray’s burgeoning music career, the best Donna could do was to book the young crooner a weekly gig at the Peach Pit’s After Dark club.

Widely viewed by Beverly Hills music scenesters as the area venue where musician’s careers go to die, After Dark was notorious for fielding the worst acts in all of California. This was hardly an endorsement of Donna’s booking prowess.

In effect, by constantly booking Ray at

a club that was actually damaging his ability to bring his music to a larger audience, Donna was killing his dreams. With that in mind, it would be hard to fault Ray for slowly building up a seething resentment towards Donna’s torpedoing of his career.

According to a study conducted by National American University, when asked what they would do if their girlfriend booked them at After Dark, 78% of the struggling artists polled said they would also push their partner down the stairs. One respondent went even further, saying he would push his girlfriend down an “up escalator” so that he could continue to push her down every time the escalator brought her back up.

4. Beautiful When You Cry
For anyone who has known Donna Martin for any length of time, one incontrovertible fact exists: there is nothing on this wildly beautiful planet quite as stunning as Donna Martin crying.

Imagine a majestic stallion drinking from a glorious waterfall, all while bathed in the glow of a breath-taking sunset designed by God himself. Do you see it? Yes? Well, that picture in your head looks like Andre the Giant’s wiener compared to Donna Martin in a full-on cry.

As her boyfriend, nobody understood this beautiful phenomenon better than Ray. In fact, in order to remain attracted to Donna, Ray quickly came to the realization that he needed to bring her to tears as often as possible. Like the expiration date on his music career, his level of attraction to Donna was running out.

Unfortunately, as their relationship progressed, Donna had begun to build up a strong resistance to Ray’s abuse. Pushing her up against the wall no longer turned on the water works. Neither did accusing her of sleeping with David. If Ray didn’t find a new way to make Donna cry soon, he risked any chance of ever being attracted to her again.

What Ray saw when he laid his eyes on that hotel staircase was a chance to see Donna at her tear-soaked best. Not knowing when he would ever be presented with such a perfect opportunity, Ray came at Donna with his best ammunition.

First, he pulled out the jealousy card. No tears. Then, he tried the “Don’t walk away from me” card. Still nothing. Finally, he tried the throw–your–girlfriend–down–a–flight–of-stairs card. Ding, ding, ding! We have a winner.

As evidenced by the touchy-feely movement of Ray’s left hand after he reaches Donna at the bottom of the stairs (feel free to watch video again), it is obvious that Ray once again finds Donna to be the most beautiful woman in the world.

(THEORY PLAUSIBILITY: 8 out of 10 stairs)

5. Lyrics Don’t Lie
If Donna truly cared about her relationship and her safety, she would’ve heeded the words that Ray had been singing repeatedly throughout the previous year.

In Pruitt’s influential and wildly successful single “Hold On,” he practically begs Donna to be grab hold of something when attempting to navigate tricky stairs:

Till you feel a little stronger
Hold on to me
Yeah, now I said
Hold on,
Everything’s gonna be all right
Just hold on to me tonight

An even closer look at the second verse of “Hold On” reveals that not only was Ray asking Donna to be aware of the dangers that come with climbing stairs, he was also letting her know that hurting her would be counterproductive for him:

Anything that hurts you, hurts me too
I’m not gonna let your, world turn blue
Will you take my hand
And feel how close I am
There ain’t nothing I won’t do for you

As you can see, Ray felt so strongly for Donna that when she felt pain, he also felt pain — much like the stories you hear about twins who experience one another’s pain.

With this in mind, it is entirely plausible that the incident was an accident, as Ray initially claims. After all, if he did truly feel Donna’s pain, why would he throw her down the stairs? He would be harming himself.

One thought on “Wrongly Accused: 5 Reasons Ray Pruit Was Right”