The winter holiday season is the perfect time of year to hunker down with family and friends, pop some popcorn, and surrender to the ever-enjoyable world of movies. After all, it’s cold outside, you’re with the ones you love and you’ve most likely eaten enough food to make it impossible to move more than three feet without soiling yourself.

For decades, countless holiday celebrations have included a healthy helping of Christmas Vacation, White Christmas, and A Christmas Story, and countless other holiday-inspired films. But while these films do a wonderful job communicating the messages of joy, love, and laughter, there are many pertinent messages that fall by the wayside by the time the final credits roll. Messages that need to be taken in by the masses during this happiest of seasons.

With that in mind, here is a list of films that may not strike you at first glance as “must watch movies” for the holiday season, but will have you praying to Santa for the BluRay editions in no time:

Few things epitomize the Christmas season like a story of a well-traveled “cooler” who punches, kicks, and throat-gouges his way into the hearts of a generic rural Missouri community.

Patrick Swayze plays Dalton, the above-mentioned bouncer with rock-hard abs, a two-pack-a-day habit, and the ability to stitch up his own knife wounds on the spot. When rich tycoon Brad Wesley makes life difficult for Dalton and his fellow employees at the Double Deuce — which frankly sounds like a bar named after two turds — Dalton is forced to make his own “Naughty or Nice” list. Guess which category Wesley falls into.

What makes this film so ideally suited for holiday viewing is the staggering number of similarities between Dalton and Santa Claus, including:

That said, many critics still argue that Road House has nothing to do with Christmas, or any other holiday for that matter. I wholeheartedly disagree. Making rich white men pay for their evil deeds is what the holiday spirit is all about. And in this case, Dalton delivers that spirit with a smile on his face. 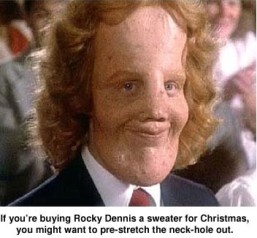 Before you get to far ahead of yourself here, let’s be clear about one thing. There is only one Mask film worthy of the name. And no, it is not the special effects-laden, story-deprived Jim Carrey ham-fest. It is the film that dares to ask “When your head is as big as a bumper car, how many Advil will it take to get rid of a migraine?”

The character of Rocky Dennis suffers from craniolsiaphyseal dysplasia, a condition that brings about severe headaches and ruins any chances that he will ever get anything from women beyond a friendly pat on the back.

Forced to watch Cher and Sam Elliot make out for most of his life only causes Rocky’s headaches to worsen. Add to that the fact that his best friend bails on their planned trip across Europe, not to mention the only woman he can attract is a blind Laura Dern, and you have a recipe for disaster.

There is no way to watch Rocky’s story without thinking about the classic Christmas story of “Bart the Craniolsiaphyseal Dysplasiac Reindeer.” Bart was the reindeer who initially defeated Rudolph in the reindeer games. Upon returning home to his cave to celebrate his victory, Bart is struck down by a severe headache. When he awakes the next morning, Bart discovers that his head has grown to the size of a Goodyear tire.

Afraid that Bart’s condition will bring shame upon the family, Bart’s father slits his son’s throat and feeds his remains to the Bumble. The truth behind Bart’s disappearance is not fully known until months later when Hermey the elf dentist finds remains of the reindeer in the Bumble’s teeth.

While I realize that this story is hardly an uplifting one, I believe that it does help to illustrate a point: People who are different in any way — big or small — are not worthy of our love or affection. It’s the American way.

Kwanzaa is a special time of year for millions of African Americans across the United States. A week-long celebration held every December to honor African culture, Kwanzaa holds a significance that quite simply blows other holidays away. If you don’t know what that significance is, I’m not going to bail you out by explaining the finer points of the holiday. You’ll just have to figure it out for yourself.

One good place to start, though, would be with Craig Brewer’s film Black Snake Moan.

In Black Snake Moan, Christina Ricci and Samuel L. Jackson help spread the core messages of Kwanzaa through their portrayals of a white-trash nymphomaniac and a deeply religious farmer/former blues guitarist, respectively, and their quest to discover why interracial bondage is not more widely accepted by mainstream America.

At the end of the day, Lazarus does what any sensible, God-fearing man would do. He keeps it in his pants and hooks Rae up with Justin Timberlake. It’s a Kwanzaa miracle!

Sex and the City

This one is simple.

Sarah Jessica Parker looks like a retarded donkey. There is a donkey in the manger scene associated with the birth of Jesus. So, if watching an entire movie starring someone who looks exactly like the Jesus donkey is what floats your boat, then this is the film for you.

That’s all I have to say about that. 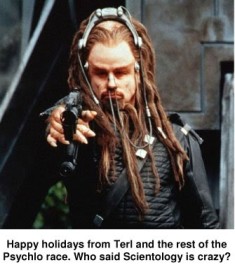 Muslims, Christians, Jews, Buddhists, and Atheists. So many different beliefs. So many different methods for honoring and celebrating those beliefs. If there is one thing all of these people can agree on during this wonderful time of year, it is that each and every Scientologist on this planet is bat-shit crazy.

This unifying assertion has the power to bring millions upon millions of people together the way no other phenomenon, philosophy, or belief ever has.

In that spirit, you would be wise to carve some time out from your holiday shenanigans to view Scientology guru L. Ron Hubbard’s Battlefield Earth. Starring one of his top brainwashed zombies, John Travolta, this film is a mish-mash of nonsensical storylines, poorly constructed characters, half-assed special effects, and nonsensical storylines (did I already mention that?).

Battlefield Earth depicts an Earth that has been under the rule of the alien Psychlos for 1,000 years and tells the story of the rebellion that develops when the Psychlos attempt to use the surviving humans as gold miners.

You know what? I’m going to stop right there. That was one paragraph more than I had ever hoped to write about this film.

Still, as I mentioned before, this film’s value exists merely in bringing us all together in the common bond of hatred and intolerance for the crazy belief system of another. Talking smack about Judaism is yesterday’s news. Telling a Muslim that Islam is for terrorists is cliché. But telling a Scientologist that they are “all sorts of fucked up” is the gift that keeps on giving.

So, do the world a favor. This holiday season, instead of volunteering at a soup kitchen, consider urinating in a Scientologist’s mailbox. Instead of donating your holiday bonus to your favorite charity, use the money to buy a billboard that depicts Tom Cruise and John Travolta painting pictures of space aliens on one another’s genitals. Instead of spending time with family….well, you should really do that. Family time is hard to come by.

It may not seem like much, but I think you’ll find that a little bit of intolerance goes a long way towards making this holiday season unforgettable.