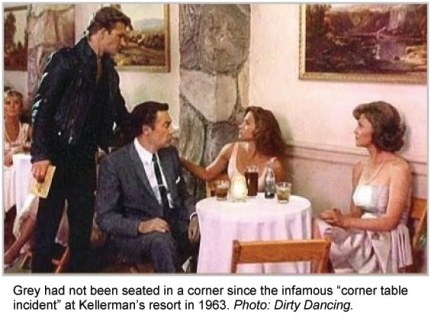 In Evanston for a charity event, Grey, who played Frances ‘Baby’ Houseman in the wildly popular film Dirty Dancing, became enraged when she and her dinner companions were shown to a spacious, well-lit corner booth at the busy suburban restaurant.

“Don’t you know that nobody puts Baby in a corner, you dumb c***?” Grey was heard screaming at Lipnicky, paraphrasing Patrick Swayze’s famous admonition of Jerry Orbach in Dirty Dancing. “Nobody!”

Doing her best to accommodate the actress, a stunned and confused Lipnicky apologized to the former rising star and promised to seat Ms. Grey and her party at the next available center table. Upon hearing that the wait for such a table could take anywhere between 5 and 45 minutes, however, Grey exploded once more, flawlessly executing Baby’s patented ‘triple-step’ routine from the movie and knocking Lipnicky to the floor.

“I’m still not sure what I did wrong,” said a shaken Lipnicky shortly after the confrontation. “She kept saying something about me mistreating ‘Baby,’ but I didn’t even see any children. Then, next thing I know, she’s dancing and I have blood coming out of my ear.”

While many diners at the bustling restaurant — known for its quality food, hefty portions and reasonable prices — were appalled by Grey’s outburst, several came to the defense of the current Dancing with the Stars contestant.

“I always tell my children to treat others the way you’d like to be treated,” said Applebee’s regular, Stacey Martinelli, before digging into her tantalizing Triple Chocolate Meltdown dessert. “But everybody knows how much Baby went through that summer in the Catskills, from dealing with that sister of hers and arranging back-alley abortions to grinding her vagina against Patrick Swayze’s legs day after day. I can see how getting seated in the corner could bring that all back.”

While empathetic to the trials and tribulations of Grey’s fictional character, restaurant general manager Gary Swenson steadfastly stood by his employee, just as he has stood by the quality of the restaurant’s ever-expanding selection of fresh-made soups and salads.

“I tried to explain to Ms. Grey that Danielle wasn’t even alive when Dirty Dancing was in theaters,” said Gary Swenson, manager of the Evanston Applebee’s since 1991. “But every time I opened my mouth, she’d stick her fingers in her ears and hum the chorus to ‘(I’ve Had) The Time of My Life’ over and over.”

According the Swenson, upon offering to comp an Appetizer Sampler for Grey and her group, the plucky actress launched a profanity-laden verbal assault in his direction, suggesting he’d be wise to “take a f***ing lesson or two from Kellerman’s,” the fictitious Catskill’s resort featured in the film.

“We’re not under any illusions that Applebee’s is on par with the quality and attention to detail moviegoers saw at Kellerman’s,” said Swenson. “But anybody who has tried our new Smokehouse Bacon Burger would agree that we are moving in the right direction.”

While no charges were officially filed by either party in the incident, Swenson has not ruled out the possibility of a civil action being brought against Grey in the near future. When reached for comment regarding the possibility of such litigation, Grey’s representation dismissed the threat as laughable.

“Ms. Grey has gone toe-to-toe with heavily armed Russian and Cuban soldiers,” said Grey’s attorney David Goldberg, referring to the actress’s role as a teenage rebel in the 80s action hit Red Dawn. “I don’t imagine Ms. Grey will be losing any sleep over a frivolous lawsuit from a restaurant chain, no matter how damn tasty their Fiesta Lime Chicken is.”

Friday evening’s incident wasn’t the first time Grey has been involved in an unsightly public confrontation. In 1997, Grey was charged with tackling a young male student whom she had witnessed playing hooky from a Manhattan-area private high school. When questioned by the police about her attack of the student, Grey quoted another of her acting credits, Jeannie from Ferris Bueller’s Day Off.

“Why should he get to do whatever he wants, whenever he wants? Why should everything work out for him? What makes him so goddamn special?”