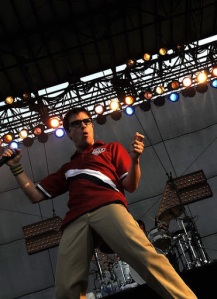 After evenly dividing the past decade between imagination-deprived songwriting and an apathy towards anything resembling his former success, it looks as though Weezer frontman Rivers Cuomo has finally taken the plunge fans and critics have been expecting for years and become a complete and utter sell-out.

In a move that must have delighted Weezer’s fourteen remaining fans, Cuomo, whose last few albums with the former alt. rock darlings have proven as underwhelming as a ValuPak coupon mailing, joined forces with hip hop talent-vortex B.o.B., lending his voice to the aspiring pop star’s latest waste-of-five-minutes “Magic.”

While Cuomo’s contribution to the fast-rising track is minimal, it is not difficult to see why the nerd rock icon jumped at the opportunity to lazily spout this lyrical plate of mashed potatoes and gravy:

Not since the days John Lennon, Jim Morrison, and Barry Gibb, have lyrics so effortlessly invaded the minds of music lovers and transported them to a place within shouting distance of Heaven. Not since the days of my perpetually drunk former neighbor Chuck, has a once-shining star so consistently topped his last disappointment with his next (to Chuck’s credit, truck-loads of Pabst Blue Ribbon have never helped in man’s decision-making process).

As for B.o.B.’s latest album, the verdict will most likely exist somewhere between the 8 million copies it sells on iTunes and the two dozen STDs the hip-hopper contracts on his latest tour. That is for his supremely discerning fans to determine. To quote one of Cuomo’s catchy tunes, however, Stink Whispers asks “Why bother?”